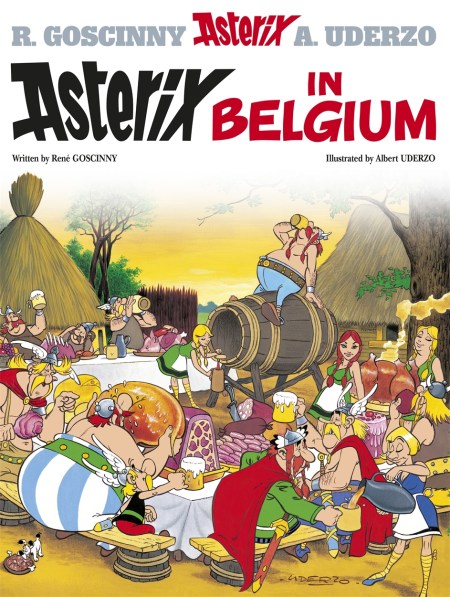 by René Goscinny Illustrated by Albert Uderzo
Who are bravest, the Belgian tribes or the Gauls? And who can destroy more fortified Roman camps? When the contest ends in a draw, and Julius Caesar is asked to adjudicate, he goes into action against both Gauls and Belgians. They unite against him, inventing fish and chips along the way. But will Caesar meet his Waterloo? 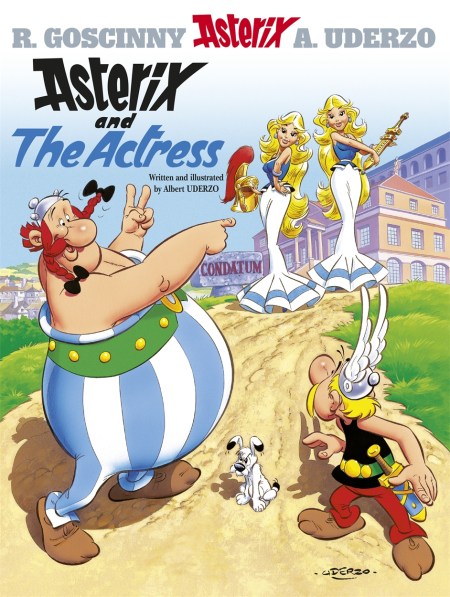 Asterix: Asterix and The Actress

by Albert Uderzo
Asterix and Obelix are celebrating their joint birthday party back in the Gaulish village – and some surprise guests have been invited! Meanwhile, Julius Caesar has to deal with his old enemy Pompey, who is looking for supporters among the legions stationed in Gaul. And just what what part do two old friends play in the story – Tremensdelirius, from ASTERIX AND CAESAR’S GIFT, and the lovely Panacea, first encountered in ASTERINX AND THE LEGIONARY? After many exciting adventures, all is finally revealed… 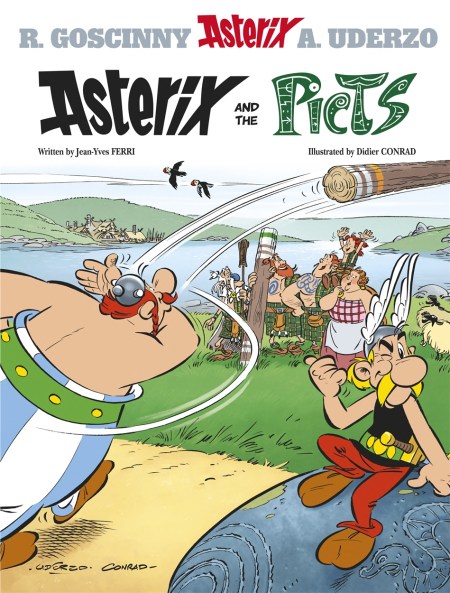 Asterix: Asterix and The Picts

by Jean-Yves Ferri Illustrated by Didier Conrad
When Asterix and Obelix rescue a mysterious Pict named MacAroon, they must journey to Caledonia, now Scotland, to return him to his lady love, Camomilla, the adopted daughter of the old king. However, the treacherous chieftain, MacCabeus, plans to marry her and claim the throne – with the help of the Romans! What with caber-tossing, bagpipes, malted water and an enormous otter in the loch, can the Gauls reunite MacAroon and Camomilla and enjoy some Roman-bashing along the way? 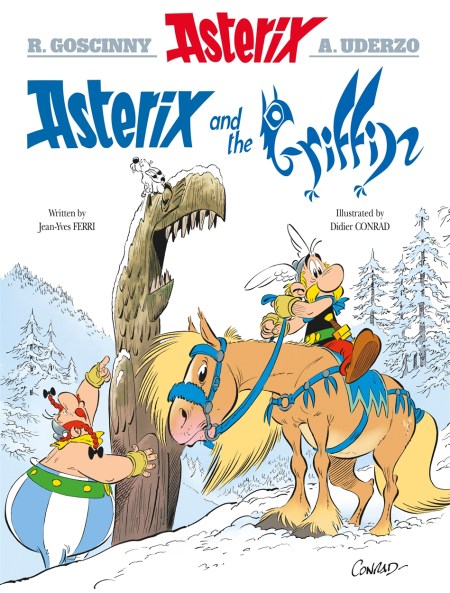 Asterix: Asterix and the Griffin

by Jean-Yves Ferri Illustrated by Didier Conrad
Deep in the frozen plains of Barbaricum, the Sarmatians face a terrible threat. The Romans are approaching in huge numbers to capture the Griffin, a sacred and terrifying beast, and they’ve kidnapped the beloved niece of the wise old shaman, Fanciakuppov, to lead them to it. Determined to stop them, Fanciakuppov seeks the help of his Gaulish friends.

Follow Asterix and Obelix as they fight alongside the fearless Amazon warrior women to rescue the prisoner and prevent the Romans reaching this formidable beast!

Loved across the Known World, the multi-million bestselling series is back with its 39th adventure. Filled with jokes, new characters and bravely fought battles, Asterix and the Griffin will delight fans old and new. 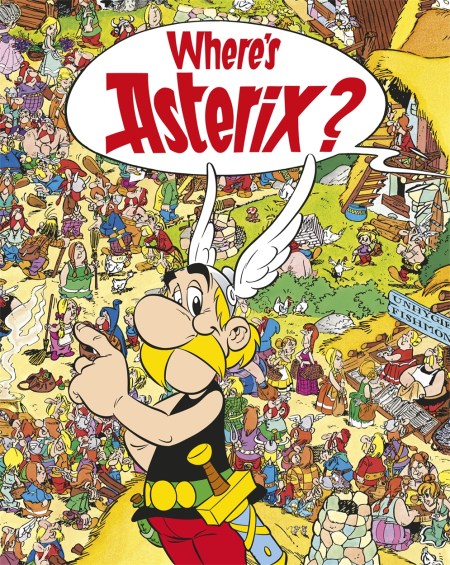 by Little Brown Illustrated by Albert Uderzo
A fun and funny volume full of hilarious scenes featuring Asterix and his friends in a range of different escapades!

Younger readers are sure to have fun searching for Asterix amidst the chaos. 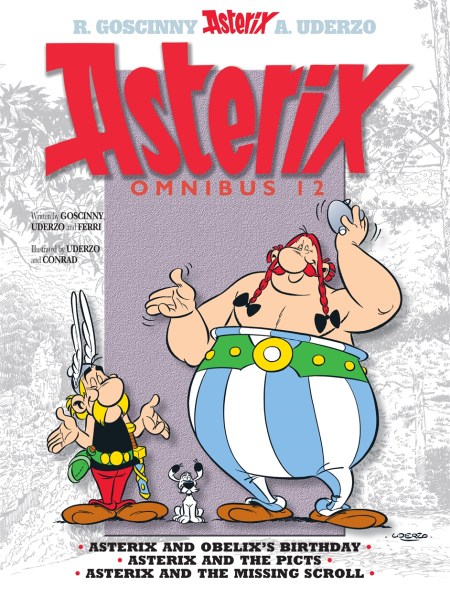 by Jean-Yves Ferri Illustrated by Didier Conrad by René Goscinny Illustrated by Albert Uderzo
In Asterix and the Picts Asterix and Obelix rescue a mysterious Pict named MacAroon and must journey to Caledonia, now Scotland, to return him to his lady love. However, the treacherous chieftain, MacCabeus, plans to marry her and claim the throne – with the help of the Romans!

In Asterix and Obelix’s Birthday, the pair celebrate their 50th birthday with adventures around the world and well-wishes from friends including Edifis, Panacea and the pirates.

In Asterix and the Missing Scroll, Caesar has finished writing the history of his campaigns in Gaul but his version of events don’t seem quite right. Can the Gauls make sure the truth is revealed in time? 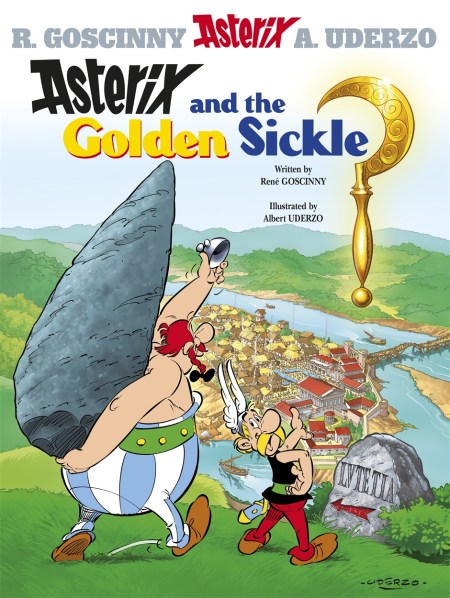 Asterix: Asterix and The Golden Sickle

by René Goscinny Illustrated by Albert Uderzo
It’s a disaster – the druid Getafix has broken his golden sickle. Asterix and Obelix go to Lutetia (now Paris) to buy him a new one. Soon they are tangling with the criminal underworld of the big city – can they outwit Navishtrix, Clovogarlix and the sickle-trafficking gang? Will Getafix ever be able to brew magic potion again? 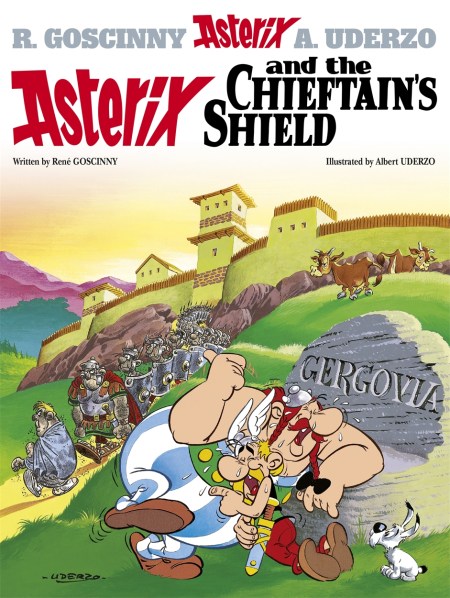 Asterix: Asterix and The Chieftain's Shield

by René Goscinny Illustrated by Albert Uderzo
When the hero Vercingetorix was defeated he threw his arms at Julius Caesar’s feet. Years later, Caesar plans to hold a triumph with his enemy’s shield – but where is it? Romans and Gauls race to track it down, and Chief Vitalstatistix, dieting on a health farm, has a surprise to spring. Will Caesar defeat the Gauls again, or will the truimph go to Asterix? 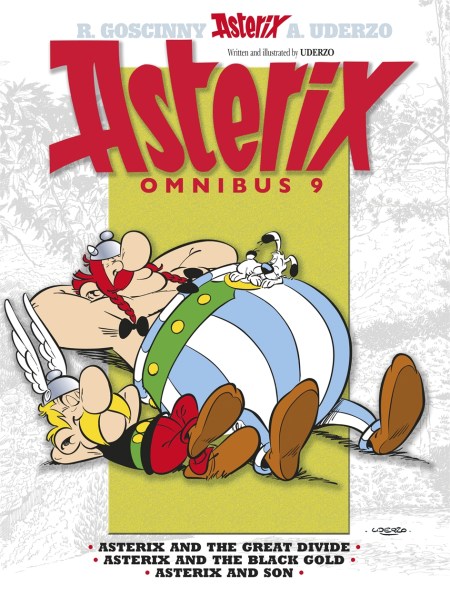 by Albert Uderzo
This special collector’s edition features books 25 to 27 in one fabulous volume.

In ASTERIX AND THE GREAT DIVIDE, can Asterix, Obelix and Getafix ensure a happy ending for star-crossed lovers Melodrama and Histrionix, whose fathers are rival chieftains? Watch out for some interesting new magic potions…

Asterix and Obelix must go prospecting in the Middle East in ASTERIX AND THE BLACK GOLD. Can they outwit the Roman secret agent Dubbelosix and his amazing folding chariot?

In ASTERIX AND SON, who can have dumped a baby outside Asterix’s hut? Why are the Romans after the baby – and just what plot is the treacherous Brutus hatching against Julius Caesar?

There is no better way to enjoy the antics of our indomitable hero and his friends. 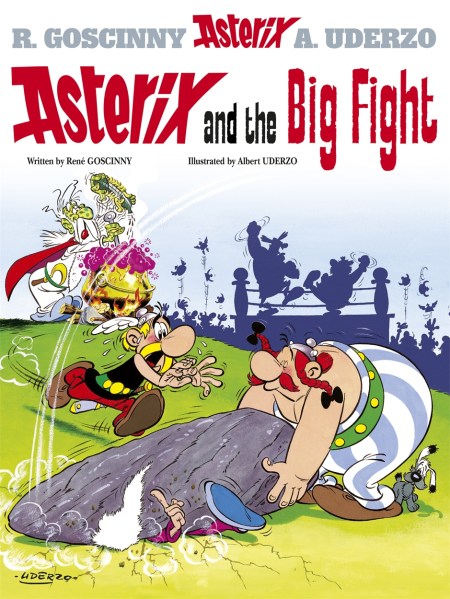 Asterix: Asterix and The Big Fight

by René Goscinny Illustrated by Albert Uderzo
A collaborator in ancient Gaul? Chief Cassius Ceramix has gone over to the Roman enemy. There’s something very fishy going on, as Legionary Infirmofpurpus discovers when he is sent to spy on the Gauls disguised as a crab apple tree. But is that just a red herring? And what about the two concussed druids brewing colourful potions? One way or another, the fight for control of the village between Vitalstatistix and his rival is bound to be a knockout. 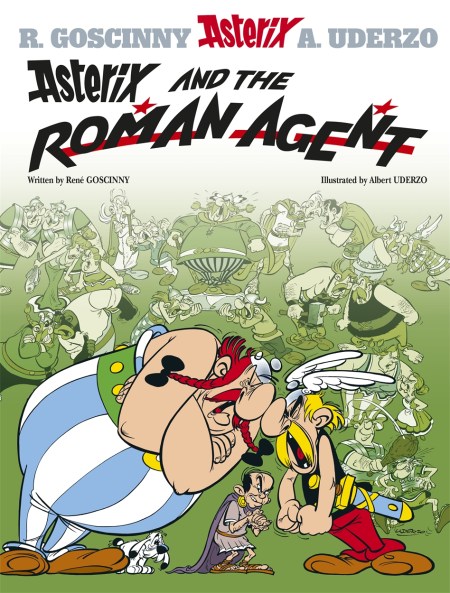 Asterix: Asterix and The Roman Agent

by René Goscinny Illustrated by Albert Uderzo
Julius Caesar turns to psychological warfare…Tortuous Convolvulus the Roman agent is guaranteed to sow jealousy and discord anywhere. Can he make the Gauls suspect each other of treachery? Has Asterix really sold Rome the secret of the magic potion? And can Asterix, Obelix and Getafix outwit the weedy but wily Convolvulus and get the villagte back to normal? 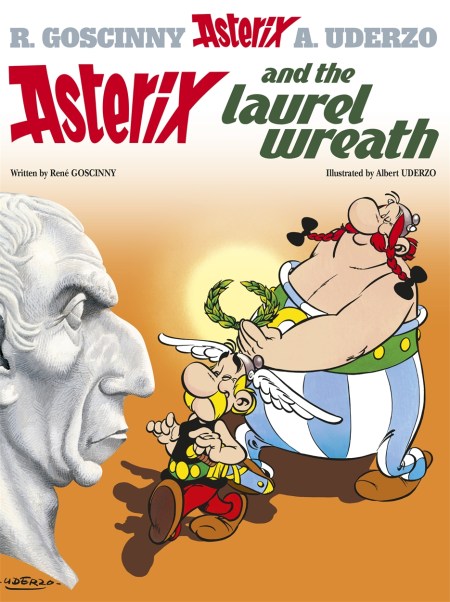 Asterix: Asterix and The Laurel Wreath

by René Goscinny Illustrated by Albert Uderzo
Chief Vitalstatistix rashly invites his brother-in-law to dine of a stew seasoned with Caesar’s laurel wreath, so Asterix and Obelix must go to Rome to fetch those laurels. Hoping to get access to Caesar, they sell themselves as slaves – but can they do a deal with the corrupt Goldendelicius to swap the laurels for parsley? If so, it will be their own Roman triumph. 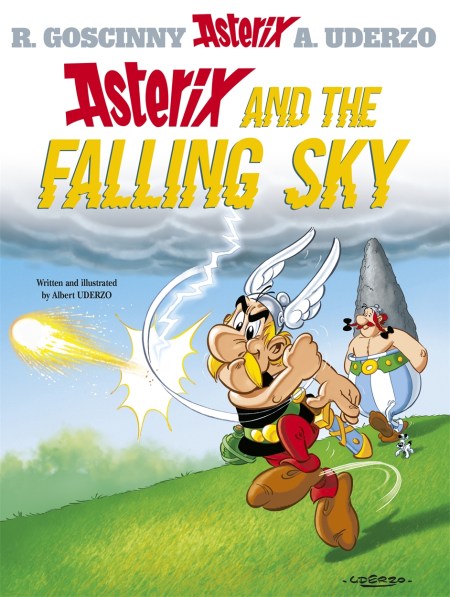 Asterix: Asterix and The Falling Sky

by Albert Uderzo
The Gauls have only one fear: that the sky may fall on their heads tomorrow. But tomorrow never comes, says Chief Vitalstatistix. Or does it? It looks as if it’s come at last for Asterix, Obelix and the other villagers. And some surprising new characters fall along with the sky. Our friends soon find themselves in the middle of a space race… 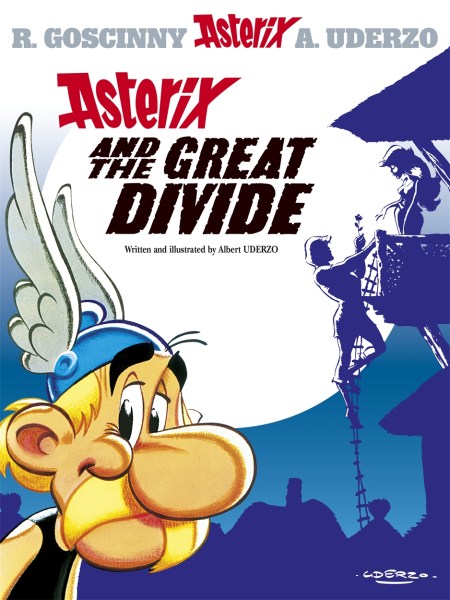 Asterix: Asterix and The Great Divide

by Albert Uderzo
Can there ever be a happy ending for star-crossed lovers Melodrama and Histionix, whose fathers are rival chieftains of the same village? The only hope is to call in Asterix, Obelix and Getafix to sort out the feud, the intriguing of the sinister traitor Codfix, and the military might of Rome. Watch out for some interesting new magic potions… 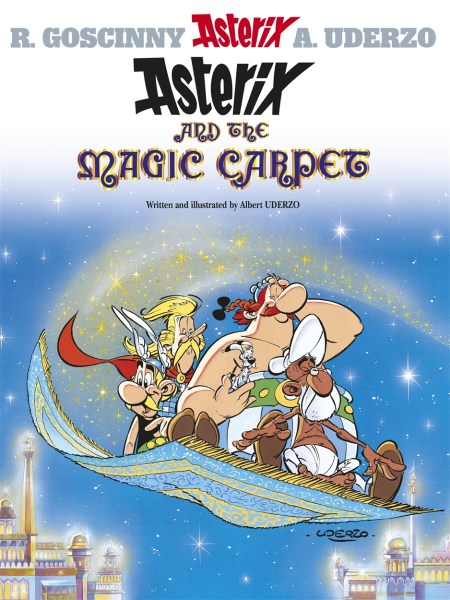 Asterix: Asterix and The Magic Carpet

by Albert Uderzo
Cacofonix’s tuneless singing always makes it rain – which is just what they want in Rajah Watzit’s distant Eastern kingdom. The guru Hoodunnit has threatened to end a terrible drought by sacrificing lovely Princess Orinjade. Can the Gauls, flown in on the fakir Watziznehm’s magic carpet, rescue her? The bard’s finest hour has come.
Previous Page Next Page