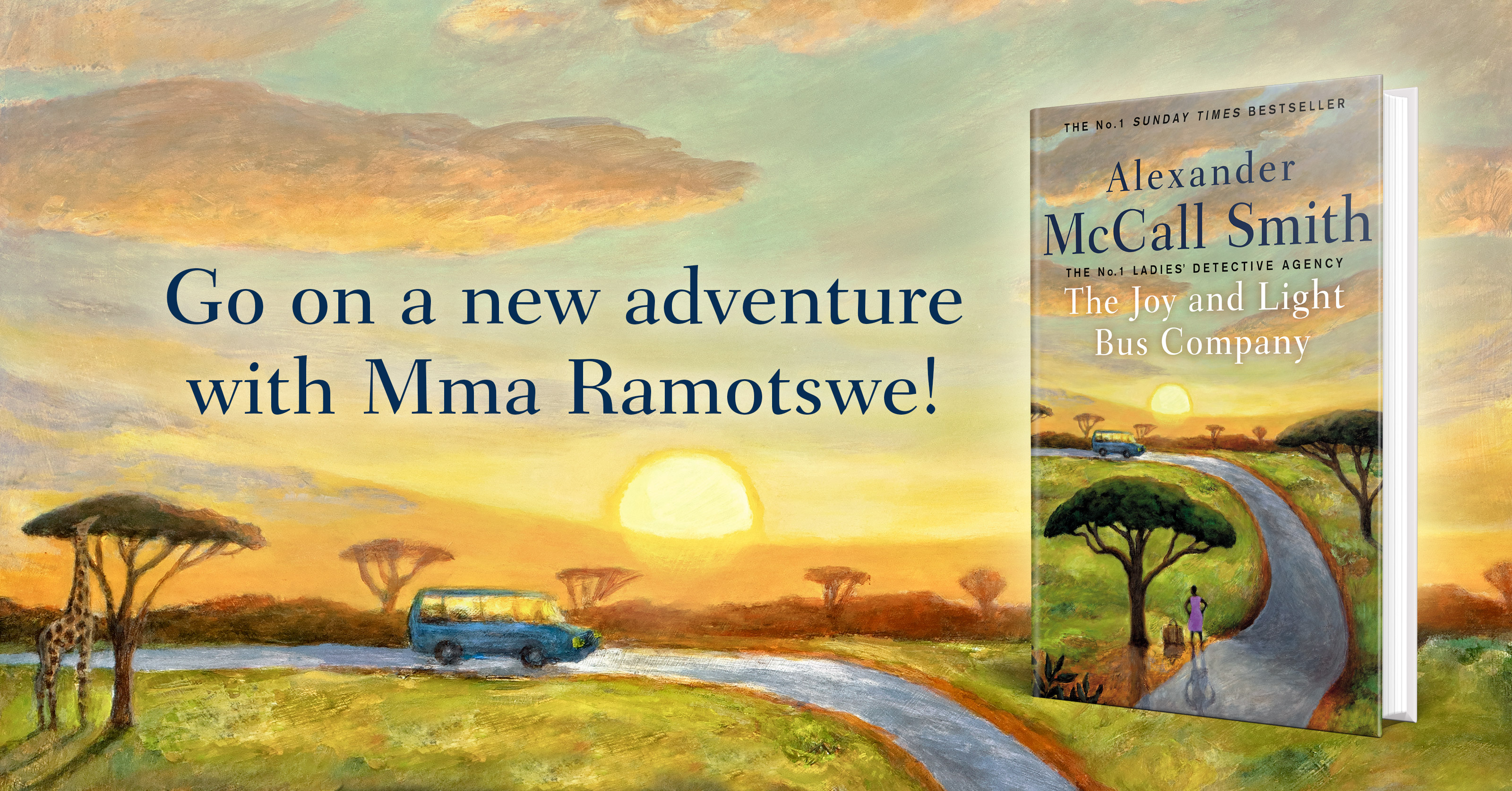 We’re excited to share a first-look at the next instalment in the classic No.1 Ladies’ Detective Agency series from bestselling author, Alexander McCall Smith.

It was a question to which Mma Ramotswe, like many women in Botswana, and indeed like many women in so many other places, gave more than occasional thought. It was not that she dwelt on it all the time; it was not even that it occupied her mind much of the time, but it was certainly something that she thought about now and then, especially when she was sitting on her veranda in the first light of the morning, looking out at the acacia tree on the other side of the road, in which two Cape doves, long in love, cooed endearments to one another, while for her part she sipped at her first cup of redbush tea, not in any hurry to do whatever it was that she had to do next. That, of course, is always a good time to think – when you know that you are going to have to do something, but you know that you do not have to do it just yet.

The question she occasionally thought about – the question in question, so to speak – was not a particularly complicated one, and could be expressed in a few simple words, namely: how do you keep men happy? Of course, Mma Ramotswe knew that there were those who considered this to be a very old-fashioned ques- tion, almost laughable, and there were even those who became markedly indignant at the assumptions that lurked behind such an enquiry. Mma Ramotswe, although a traditional woman in some respects, also considered herself modern in others, and understood very well that women were not placed on this earth simply to look after men. There were unfortunately still men who seemed to hold that view – they had not entirely disappeared – but they were fewer in number, she was happy to observe, and nobody paid much attention to them any longer. These men were called past-tense men by Mma Makutsi, Mma Ramotswe’s friend and colleague – a vivid, if perhaps slightly unkind expression. If any man expressed such sentiments today, Mma Ramotswe reflected, he would have to face phalanxes of angry women challenging him in no uncertain terms. Mma Makutsi would not tolerate attitudes like that, and no man would get away with speaking like that within her earshot. And Mma Makutsi’s hearing, for this and other purposes, was known to be particularly acute.

‘Grace Makutsi can hear an ant walking across the ground,’ Mma Ramotswe had once observed to Mr J. L. B. Matekoni. ‘At least, I am told she can.’

Mr J. L. B. Matekoni had looked incredulous. ‘I do not think so, Mma,’ he said. ‘Ants do not make much noise when they are walking. I think that even other ants do not hear them all that well. I’m not even sure if ants have ears, Mma.’

Mma Ramotswe had smiled. She had not meant her remark to be taken literally, but Mr J. L. B. Matekoni often took things at face value and was not as receptive to metaphor as he might be. This could be owing to the fact that he was a mechanic, and mechanics tended to think in a practical way, or it could just be the way his particular mind worked – it was hard to tell. But even as she smiled at his response, she found herself wondering whether it was true that ants made no noise. She had always imagined that they did – at least when there were enough of them engaged in the sort of joint activity that ants sometimes embarked upon, when they moved in an orderly column, like an army on the march, shifting any blades of dry grass or grains of sand that got in their way. Even tiny ants, acting together in such numbers, could be heard to make a rustling sound, as they went about their unfathomable business. And of course there were enough monuments to that business in those places where termites erected their extraordinary mud towers. Those were astonishing creations – high, tapering piles of hardened mud, red-brown on fresh creation but, when old and weathered, as grey as a long-felled branch or tree-trunk. There must have been some noise in the making of those strange, vertical ant cities, even if there was usually nobody to hear it.

But now she was thinking of that other question – that of how to keep men contented. It was, she thought, a good idea to keep men happy, just as it was a good idea to keep women happy. Both sexes, she thought, might give some thought to the happiness of the other. She knew that there were some women who did not care much about men, and who would not be bothered too much if there were large numbers of discontented men, but she did not think that way herself. Such women, she thought, were every bit as selfish as those men who seemed not to care about the happiness of women. We should all care about each other, she felt, and it made no difference whether an unhappy person was a man or a woman. Any unhappiness, in anybody at all, was a shame. It was as simple as that: it was a shame.

If you were to think about the happiness of men, and if you were to decide that it would be better for any men in your life to be happy rather than unhappy, then what could you do to achieve that goal? One answer, of course, was to say that it was up to men to make themselves happy – that this was not something that women should have to worry about too much, that men should be responsible for themselves. There was some truth in that, Mma Ramotswe thought – men could not expect women to run around after them like nursemaids, but, even then, there were things that women could do to help them to look after themselves and to make their lives a little bit better.

The first thing to do, perhaps, was to look at men and try to work out what it was that men wanted. All of us, Mma Ramotswe thought, wanted something, even if we were unable to tell anybody exactly what it was that we wanted. If you went up to somebody in the street and said, ‘Excuse me, but what is it that you want?’ you might be rewarded with a look of surprise, perhaps even of alarm. But the question was not as odd as it might seem, because there were many people who were not at all sure what they wanted in life, and might do well to ask themselves that unsettling question from time to time.