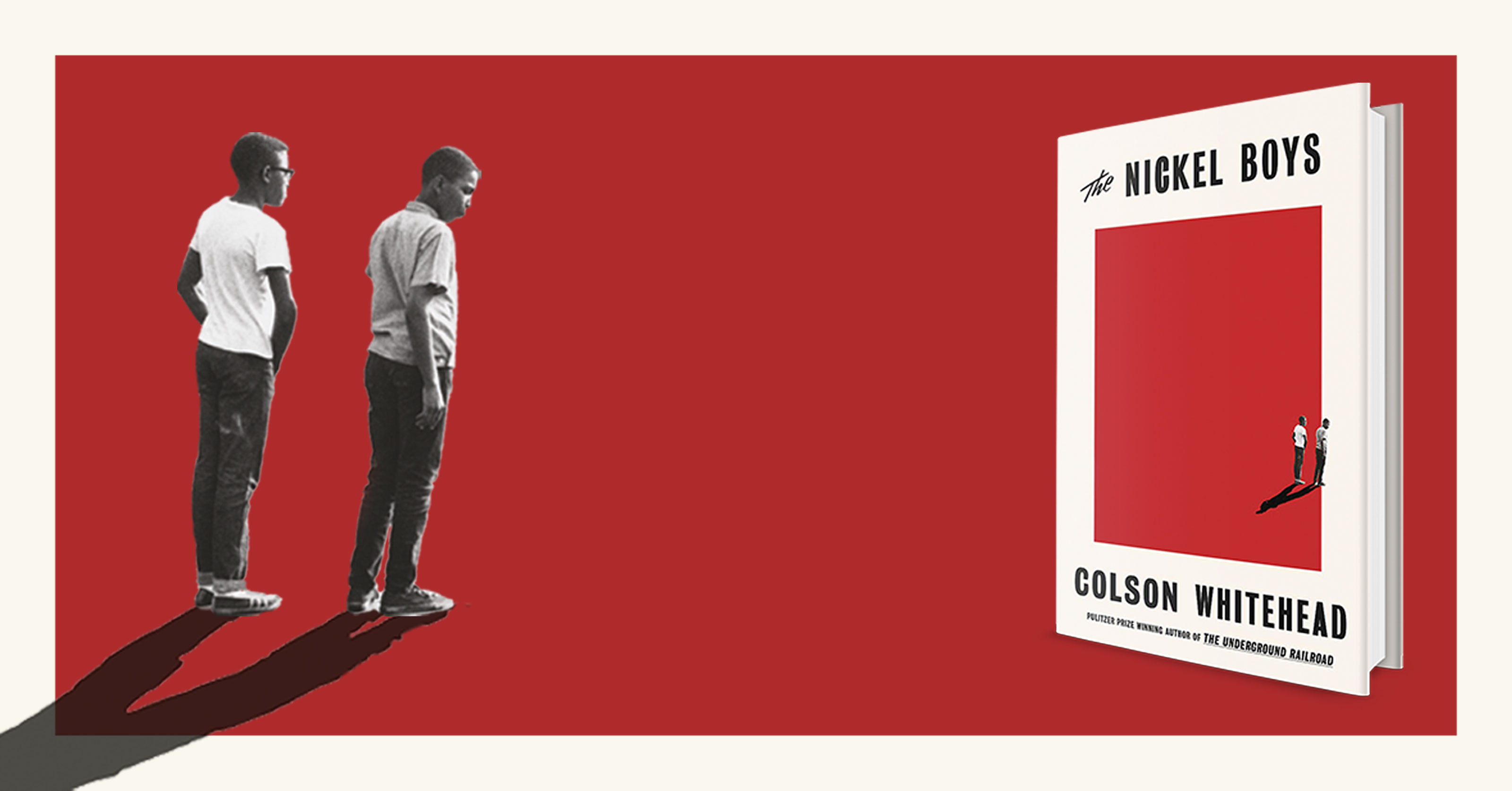 Read an extract from The Nickel Boys, the new novel from the Pulitzer Prize-winning author of The Underground Railroad, Colson Whitehead – a devastating novel – based on true events – of a hellish American reform school.

Even in death the boys were trouble. The secret graveyard lay on the north side of the Nickel campus, in a patchy acre of wild grass between the old work barn and the school dump. The field had been a grazing pasture when the school operated a dairy, selling milk to local customers—one of the state of Florida’s schemes to relieve the taxpayer burden of the boys’ upkeep. The developers of the office park had earmarked the field for a lunch plaza, with four water features and a concrete bandstand for the occasional event. The discovery of the bodies was an expensive complication for the real estate company awaiting the all clear from the environmental study, and for the state’s attorney, which had recently closed an investigation into the abuse stories. Now they had to start a new inquiry, establish the identities of the deceased and the manner of death, and there was no telling when the whole damned place could be razed, cleared, and neatly erased from history, which everyone agreed was long overdue.

All the boys knew about that rotten spot. It took a student from the University of South Florida to bring it to the rest of the world, decades after the first boy was tied up in a potato sack and dumped there. When asked how she spotted the graves, Jody said, “The dirt looked wrong.” The sunken earth, the scrabbly weeds. Jody and the rest of the archaeology students from the university had been excavating the school’s official cemetery for months. The state couldn’t dispose of the property until the remains were properly resettled, and the archaeology students needed field credits. With stakes and wire they divided the area into search grids, dug with hand shovels and heavy equipment. After sifting the soil, bones and belt buckles and soda bottles lay scattered on their trays in an inscrutable exhibit.

The Nickel Boys called the official cemetery Boot Hill, from the Saturday matinees they had enjoyed before they were sent to the school and exiled from such pastimes. The name stuck, generations later, with the South Florida students who’d never seen a Western in their lives. Boot Hill was just over the big slope on the north campus. The white concrete X’s that marked the graves caught the sunlight on bright afternoons. Names were carved into two-thirds of the crosses; the rest were blank. Identification was difficult, but competition between the young archaeologists made for constant progress. The school records, though incomplete and haphazard, narrowed down who WILLIE 1954 had been. The burned remains accounted for those who perished in the dormitory fire of 1921. DNA matches with surviving family members—the ones the university

students were able to track down—reconnected the dead to the living world that proceeded without them. Of the forty-three bodies, seven remained unnamed.

The students piled the white concrete crosses in a mound next to the excavation site. When they returned to work one morning, someone had smashed them into chunks and dust.

Boot Hill released its boys one by one. Jody was excited when she hosed down some artifacts from one of the trenches and came across her first remains. Professor Carmine told her that the little flute of bone in her hand most likely belonged to a raccoon or other small animal. The secret graveyard redeemed her. Jody found it while wandering the grounds in search of a cell signal. Her professor backed up her hunch, on account of the irregularities at the Boot Hill site: all those fractures and cratered skulls, the rib cages riddled with buckshot. If the remains from the official cemetery were suspicious, what had befallen those in the unmarked burial ground? Two days later cadaver-sniffing dogs and radar imaging confirmed matters. No white crosses, no names. Just bones waiting for someone to find them.

“They called this a school,” Professor Carmine said. You can hide a lot in an acre, in the dirt. One of the boys or one of their relatives tipped off the media. The students had a relationship with some of the boys at that point, after all the interviews. The boys reminded them of crotchety uncles and flinty characters from their old neighborhoods, men who might soften once you got to know them but never lost that hard center. The archaeology students told the boys about the second burial site, told the family members of the dead kids they’d dug up, and then a local Tallahassee station dispatched a reporter. Plenty of boys had talked of the secret graveyard before, but as it had ever been with Nickel, no one believed them until someone else said it.

The national press picked up the story and people got their first real look at the reform school. Nickel had been closed for three years, which explained the savagery of the grounds and the standard teenage vandalism. Even the most innocent scene—a mess hall or the football field—came out sinister, no photographic trickery necessary. The footage was unsettling. Shadows crept and trembled at the corners and each stain or mark looked like dried blood. As if every image caught by the video rig emerged with its dark nature exposed, the Nickel you could see going in and then the Nickel you couldn’t see coming out.

If that happened to the harmless places, what do you think the haunted places looked like?

Nickel Boys were cheaper than a dime-a-dance and you got more for your money, or so they used to say. In recent years, some of the former students organized support groups, reuniting over the internet and meeting in diners and McDonald’s. Around someone’s kitchen table after an hour’s drive. Together they performed their own phantom archaeology, digging through decades and restoring to human eyes the shards and artifacts of those days. Each man with his own pieces. He used to say, I’ll pay you a visit later. The wobbly stairs to the schoolhouse basement. The blood squished between my toes in my tennis shoes. Reassembling those fragments into confirmation of a shared darkness: If it is true for you, it is true for someone else, and you are no longer alone.

Big John Hardy, a retired carpet salesman from Omaha, maintained a website for the Nickel Boys with the latest news. He kept the others apprised on the petition for another investigation and how the statement of apology from the government was coming along. A blinking digital widget kept track of the fund-raising for the proposed memorial. E-mail Big John the story of your Nickel days and he’d post it with your picture. Sharing a link with your family was a way of saying, This is where I was made. An explanation and an apology.

The annual reunion, now in its fifth year, was strange and necessary. The boys were old men now, with wives and ex-wives and children they did or didn’t talk to, with wary grandchildren who were brought around sometimes and those whom they were prevented from seeing. They had managed to scrape up a life after leaving Nickel or had never fit in at all with normal people. The last smokers of cigarette brands you never see, late to the self-help regimens, always on the verge of disappearing. Dead in prison, or decomposing in rooms they rented by the week, frozen to death in the woods after drinking turpentine. The men met in the conference room of the Eleanor Garden Inn to catch up before caravaning out to Nickel for the solemn tour. Some years you felt strong enough to head down that concrete walkway, knowing that it led to one of your bad places, and some years you didn’t. Avoid a building or stare it in the face, depending on your reserves that morning. Big John posted a report after each reunion for those who couldn’t make it.

In New York City there lived a Nickel Boy who went by the name of Elwood Curtis. He’d do a web search on the old reform school now and then, see if there were any developments, but he stayed away from the reunions and didn’t add his name to the lists, for many reasons. What was the point? Grown men. What, you take turns handing each other Kleenex? One of the others posted a story about the night he parked outside Spencer’s house, watching the windows for hours, the silhouette figures inside, until he talked himself out of revenge. He’d made his own leather strap to use on the superintendent. Elwood didn’t get it. Go all that way, might as well follow through.

When they found the secret graveyard, he knew he’d have to return. The clutch of cedars over the TV reporter’s shoulder brought back the heat on his skin, the screech of the dry flies. It wasn’t far off at all. Never will be. 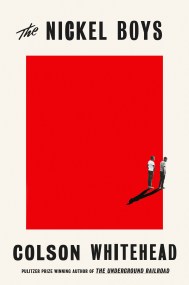 Author of The Underground Railroad, Colson Whitehead, brilliantly dramatizes another strand of American history through the story of two boys sentenced to a hellish reform school in 1960s Florida.

Elwood Curtis has taken the words of Dr Martin Luther King to heart: he is as good as anyone. Abandoned by his parents, brought up by his loving, strict and clear-sighted grandmother, Elwood is about to enroll in the local black college. But given the time and the place, one innocent mistake is enough to destroy his future, and so Elwood arrives at The Nickel Academy, which claims to provide 'physical, intellectual and moral training' which will equip its inmates to become 'honorable and honest men'.

In reality, the Nickel Academy is a chamber of horrors, where physical, emotional and sexual abuse is rife, where corrupt officials and tradesmen do a brisk trade in supplies intended for the school, and where any boy who resists is likely to disappear 'out back'. Stunned to find himself in this vicious environment, Elwood tries to hold on to Dr King's ringing assertion, 'Throw us in jail, and we will still love you.' But Elwood's fellow inmate and new friend Turner thinks Elwood is naive and worse; the world is crooked, and the only way to survive is to emulate the cruelty and cynicism of their oppressors.

The tension between Elwood's idealism and Turner's skepticism leads to a decision which will have decades-long repercussions.

Based on the history of a real reform school in Florida that operated for one hundred and eleven years and warped and destroyed the lives of thousands of children, The Nickel Boys is a devastating, driven narrative by a great American novelist whose work is essential to understanding the current reality of the United States.