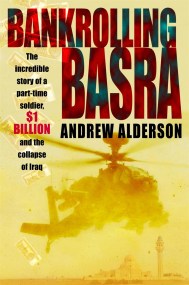 In 2003, Andrew Alderson gave up his job as a director of a London merchant bank hoping to find a new direction in life. Then,…