Riveting and wonderful! A fascinating desert world, a compelling heroine, and a richly satisfying conclusion. Empire of Sand will sweep you away!
Sarah Beth Durst
A darkly intricate, devastating, and utterly original story about the ways we are bound by those we love
R. F. Kuang, author of THE POPPY WAR
The best fantasy novel I have read this year. I loved it!
Miles Cameron
Empire of Sand is astounding. The desert setting captured my imagination, the magic bound me up, and the epic story set my heart free
Fran Wilde
The desert setting, complex characters, and epic mythology will captivate readers
BOOKLIST (starred review)
A stunning and enthralling debut, Empire of Sand thoroughly swept me away
S. A. Chakraborty, author of CITY OF BRASS
Empire of Sand is a lovely dark dream full of wrenching choices and bittersweet triumph. This gorgeous, magic-woven story and its determined heroine spin hope from hopelessness, power from powerlessness, and love from desolation
Melissa Caruso
A powerful story of empire, magic, and resistance, told with an intimate poignancy and emotional resonance
Rowenna Miller
This is the future of fantasy: rich, complex, unflinching. Empire of Sand is a stunning achievement
Mark Oshiro
A beautiful story in a stunning, magical world. An enthralling debut
Claire North
An oasis of a story that you fall into, head-first. A mesmerising tale full of magic and mystery
Sayantani DasGupta
Dark secrets lurk at an empire's heart in this complex, affecting epic fantasy . . . A worthy addition to any epic fantasy fan's bookshelf
PUBLISHERS WEEKLY (starred review)
Genuine, painful, and beautiful. A very strong start for a new voice
KIRKUS (starred review)
Empire of Sand draws you into an intricately realized world of blood and secrets. An arresting and magical history told through the eyes of an indomitable heroine. I cannot ask for more.
Jeannette Ng
I was hooked from the moment I began Tasha Suri's gorgeous debut novel, Empire of sand. Suri has created a rich world full of beautiful and powerful magic, utterly compelling characters, high stakes and immersive prose. I absolutely loved it!
Kat Howard 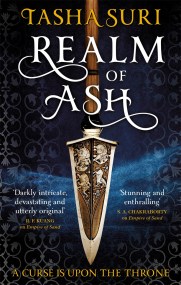 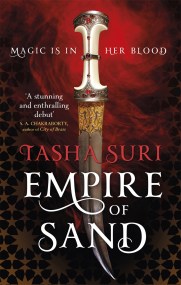