Grabs you by the throat and doesn't let go. A perfect military fantasy: brutal, complex, human and impossible to put down
Tasha Suri
It doesn't take long to realize The Unbroken is something special. I'm going to need book two ASAP
David Dalglish
Clark gives us an unflinching story of colonialism and revolution and the people caught between. The Unbroken grabs you by the collar, breaks your heart over its knee, and mends it. An astonishing debut
Andrea Stewart, author of The Bone Shard Daughter
Rife with political, familial, and romantic tension, The Unbroken is a riveting epic fantasy about a city on the knife's edge of rebellion, a tangle of alliances, and a desperate search for magic and hope
K.A. Doore, author of The Perfect Assassin
Get ready to fall in love with Touraine and Luca in one of the best fantasy debuts I have ever read!
Matt Wallace, Hugo Award winner and author of the Savage Rebellion series

Magic of the Lost 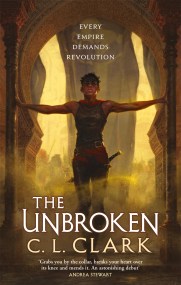