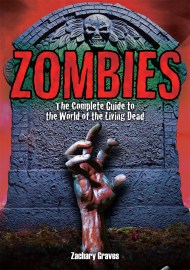 Inspired by horror films of the past, such as George Romero's 1968 classic Night of the Living Dead, zombies have come lurching back into the…