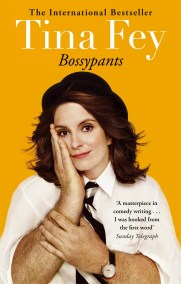 Once in a generation a woman comes along who changes everything. Tina Fey is not that woman, but she met that woman once and acted…