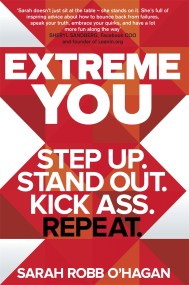 'Sarah doesn't just sit at the table - she stands on it. She's full of inspiring advice about how to bounce back from failures, speak…