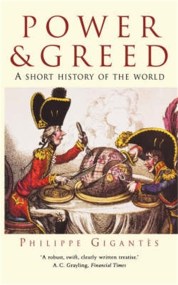 This lively and fascinating book by a professor of history deals with human greed and power and how these determine world events. Gigantès takes the…