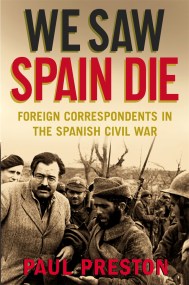 The war in Spain and those who wrote at first hand of its horrors. From 1936 to 1939 the eyes of the world were fixed…