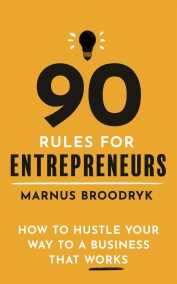 Discover the secrets that distinguish successful entrepreneurs from those who fail, and learn which rules to follow and which to break. This is not just…