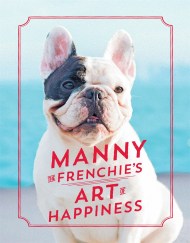 Manny the Frenchie's Art of Happiness

In 2011, Manny was the runt of the litter and on his way to a shelter. But when his parents scooped him up, named him…