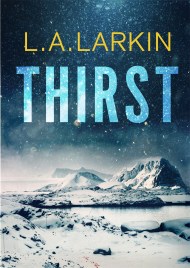 Antarctica is the coldest, most isolated place on earth. Luke Searle, maverick glaciologist, has made it his home. But soon his survival skills will be…