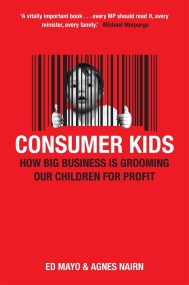 This book will shock you. Consumer Kids shows how, more than ever before, and perhaps more than anywhere else in the world, our children are…