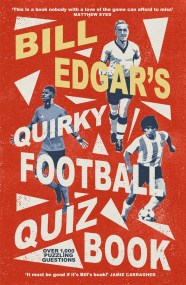 'Bill Edgar is simply the best. His quizzes draw upon one of the greatest minds in football. This is a book nobody with a love…