An epic fantasy set apart by how deftly Okungbowa unfurls his intricate, richly imagined world. It's not often you get to read a fantasy novel that spans not only ancient magic, sinister machinations and monstrous forests but courthouses, college classes and hairdressers too, evoking the terrible and fascinating city-state of Bassa in living, breathing detail
A. K. Larkwood, author of The Unspoken Name
An original and fascinating epic fantasy full of bold characters, bloody action and brutal politics. I thoroughly enjoyed it!
James Islington
Highly recommended for fans of epic fantasy based on non-European mythologies
Library Journal (starred review)
A world so exquisitely observed in every detail, from the built environment to its social and political organization, that you can't help but tumble headlong into its vivid, captivating reality. Esheme is a standout: her unflinching subversion of motherhood to serve her own ends absolutely thrilled me
Shelley Parker-Chan, author of She Who Became the Sun
Although set in a pre-industrialised world, the themes explored in Suyi Davies Okungbowa's Son of the Storm have a palpable contemporary resonance. Okungbowa weaves an intricate and irresistible plot around the tensions and contradictions of a corrupt, decadent society which is both dependent upon and resentful of its diverse migrant population. The result is a vibrant tale of betrayal, intrigue and revolution which benefits greatly from an original setting, a fresh take on magic and deftly executed characterisation
Anthony Ryan
I have to say that this is everything I love to see in a fantasy story: masterful, fully-realised worldbuilding, morally complex characters, thoughtful and piercing interrogations of power, privilege, and all the facets of human nature. Can't wait to see the next book in the series. Damn good stuff!
Jenn Lyons
It's always refreshing to find fantasies that break with all the old conventions and tropes, and Son of the Storm delivers on this like a flash of lightning in the dark! Set in a deftly crafted world of forbidden sorcery, magical beasts and fractured polities, this tale follows three characters whose seemingly disparate journeys are set for a collision course that will rewrite the fate of whole peoples and empires. Suyi Davies Okungbowa has created an original and fully conceived new world of fantasy teeming with brilliant possibilities and demanding to be explored!
P. Djèlí Clark
Okungbowa's world feels fully formed from the first pages, sweeping readers away into an elaborately plotted tale of ancient magics and world-shattering politics. I, like many others, will be impatiently waiting for the next installment!
Andrea Stewart
This sweeping and politically charged fantasy explores race, gender, and culture in a complex and compelling world
Buzzfeed
A contender for best new fantasy series of the year
SFX
A mesmerising coming of age tale set against a thrilling, fantastical adventure that introduces an beguiling new world...and then rips apart everything you think you know
S. A. Chakraborty
Okungobwa's richly-drawn and ruthlessly strict world never provides its conflicted characters with easy answers. Fantastical beasts and forgotten magic propel a story about ambition, conspiracy, and the elusiveness of belonging. This is epic fantasy that will make you think and leave you unsettled
Fonda Lee 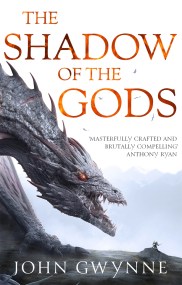