Pool accomplishes a masterful balance of exposition, action, and characterization . . . full of genuinely surprising and interesting twists that will have readers anxious to get to the last page
The Bulletin
Gripping fun
SFX
The real magic of There Will Come a Darkness is in how Pool has crafted her heroes - messy, flawed and so beguilingly human. I dare you not to fall madly in love with all of them
Laura Sebastian, NEW YORK TIMES bestselling author
A sweeping, ambitious fantasy that pulled me into a world of corruption, dark prophecy and, ultimately, hope. The breathlessly paced story and well-rendered ensemble cast gripped me until the very last pages
Julie C. Dao, author of FOREST OF A THOUSAND LANTERNS
There Will Come a Darkness is a can't-miss debut from an exciting new talent. I defy you not to lose yourself in this vast, luscious fantasy
Kiersten White, NEW YORK TIMES bestselling author of SLAYER
Katy Rose Pool combines lovable characters, a gorgeously tangible world and an intricate puzzle-box plot to create a story that will pull you inexorably toward the explosive end
Sarah Holland, NEW YORK TIMES bestselling author of EVERLESS
A brilliantly woven story with compelling characters, surprising twists and a prophecy driven not by distant fate but by hard, human choices. There Will Come a Darkness was a pleasure to read and left me eager for more!
Melissa Caruso, author of THE TETHERED MAGE
A masterful fantasy debut. Katy Rose Pool is a writer to watch
SEBASTIEN DE CASTELL, author of TRAITOR'S BLADE
A beautiful woven fantasy of prophecy, intrigue and unforgettable characters. There Will Come a Darkness feels both utterly original and like the best of classic fantasy
Tasha Suri, author of EMPIRE OF SAND
This epic fantasy novel revels in rich worldbuilding [and] deftly plays with genre expectations . . . A well-crafted, surprising, and gripping start to a new trilogy
KIRKUS
Katy Rose Pool's plot is always seven steps ahead of you. You'll want to catch up as quickly as possible
Refinery 29 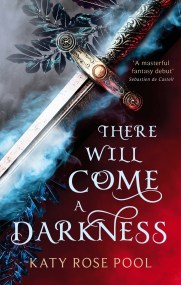