North goes from strength to strength
GUARDIAN
Like Penelope at her loom North both weaves and unweaves, teasing out the threads of Homeric myth to recombine them into something unique, wonderful and urgently contemporary
M. R. Carey, author of THE GIRL WITH ALL THE GIFTS
The queen of the gods narrates a crackling tale of secrets and intrigue... this is a ground-up view of Greek myth populated by spying maids, crafty merchants, and conniving queens. It's taut, suspenseful, and full of Hera's delightfully dyspeptic attitude. A thoroughly enjoyable exploration of Penelope's side of the ancient story
KIRKUS
Claire North has set a new standard for Ancient Greek retellings. Absolutely sublime
Hannah Lynn, author of ATHENA'S CHILD
Richly poetic and does justice to the very real and frustrating world of women forced to survive within a world of patriarchy, assault, and violence. This is an impassioned plea for the lost, disenfranchised queens of ancient Greece, a love letter to the silenced women of history who had to hide their pain behind their eyes and their skills, capabilities and power behind false incompetence and ignorance
BOOKLIST
Everything I've wanted in a retelling: a vibrant cast, full of suspense, told with a phenomenal narrative voice - this is an absolute masterpiece
Sarah Bonner, author of HER PERFECT TWIN
North's talent shines out
SUNDAY TIMES
An original and even dazzling writer
KIRKUS
Claire North brings a powerful, fresh and unflinching voice to ancient myth - darkly fascinating, raw and breathtaking'
Jennifer Saint, author of SUNDAY TIMES bestseller ARIADNE

The Songs of Penelope 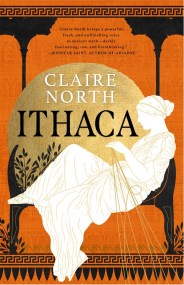